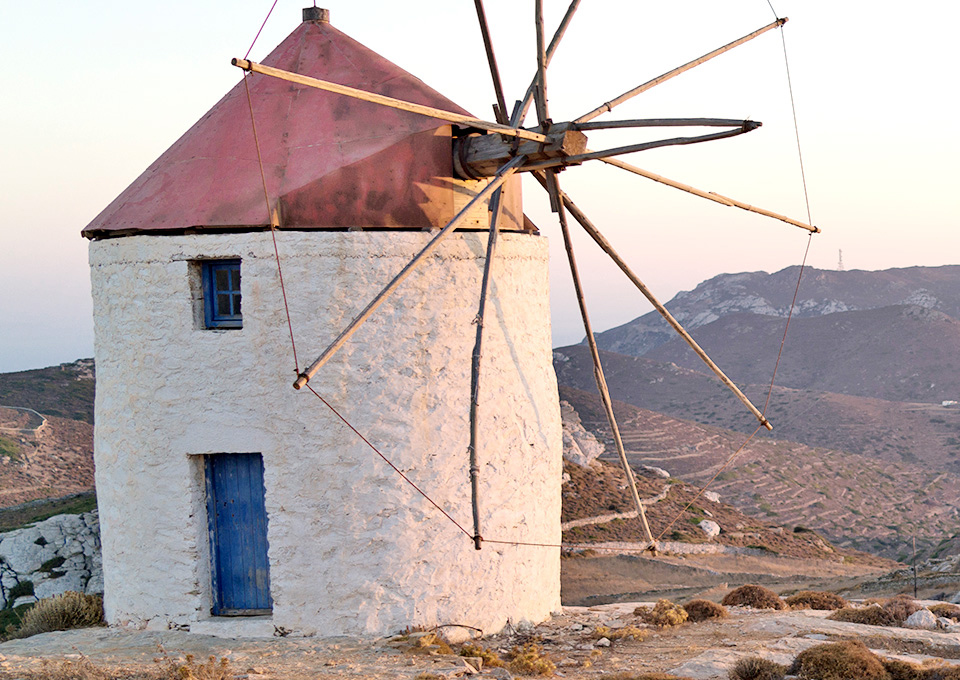 Amorgos is the easternmost island
of the Cyclades island group.

It is also the nearest island to the Dodecanese island group in Greece.

Amorgos (Greek: Αμοργός, pronounced [amorˈɣos]) is the easternmost island of the Cyclades island group and the nearest island to the neighbouring Dodecanese island group in Greece. Along with several neighbouring islets, the largest of which is Nikouria Island, it comprises the municipality of Amorgos, which has a land area of 126.346 square kilometres (48.782 square miles)[1] and a population of 1,973 (2011 census). 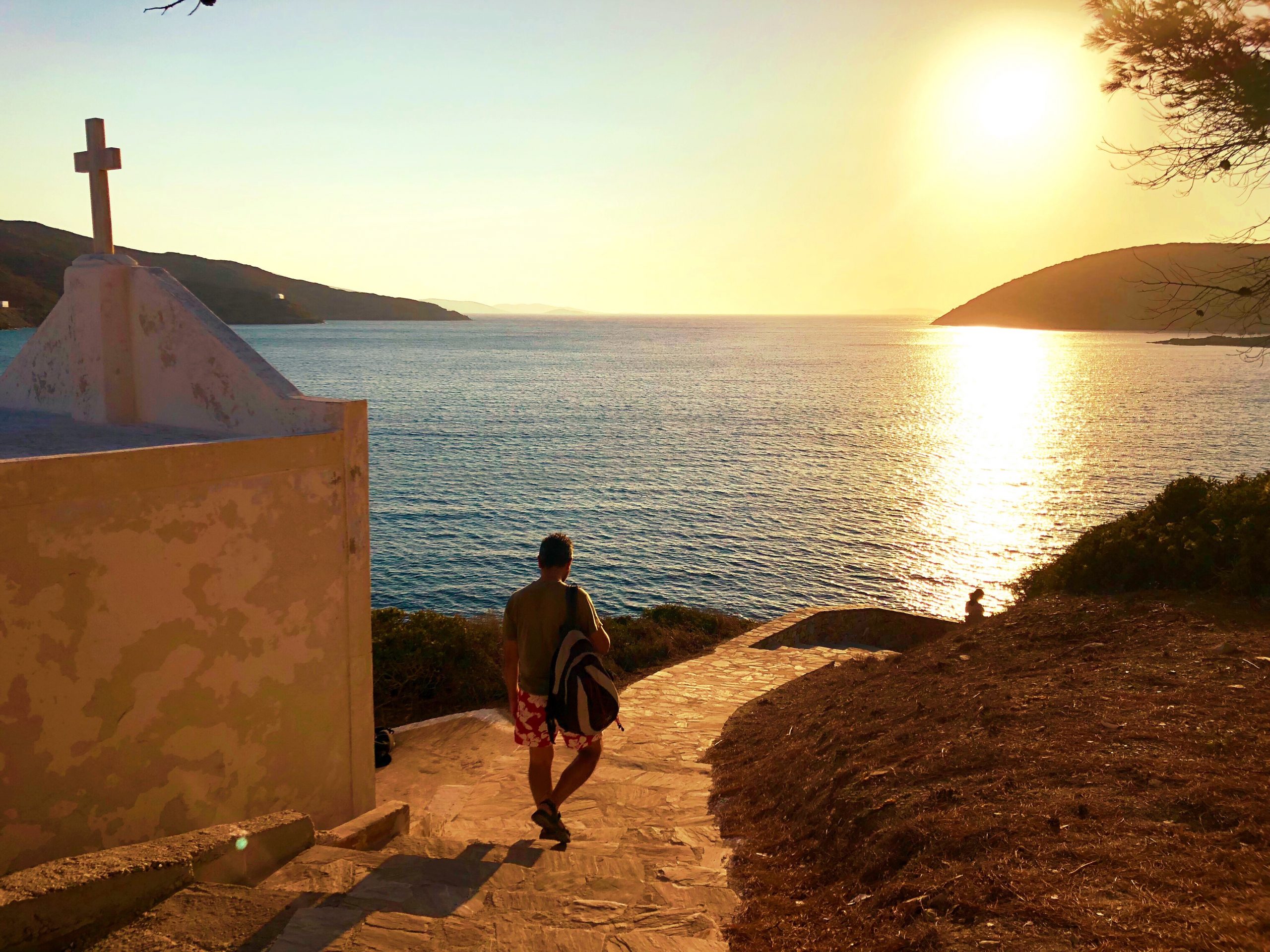 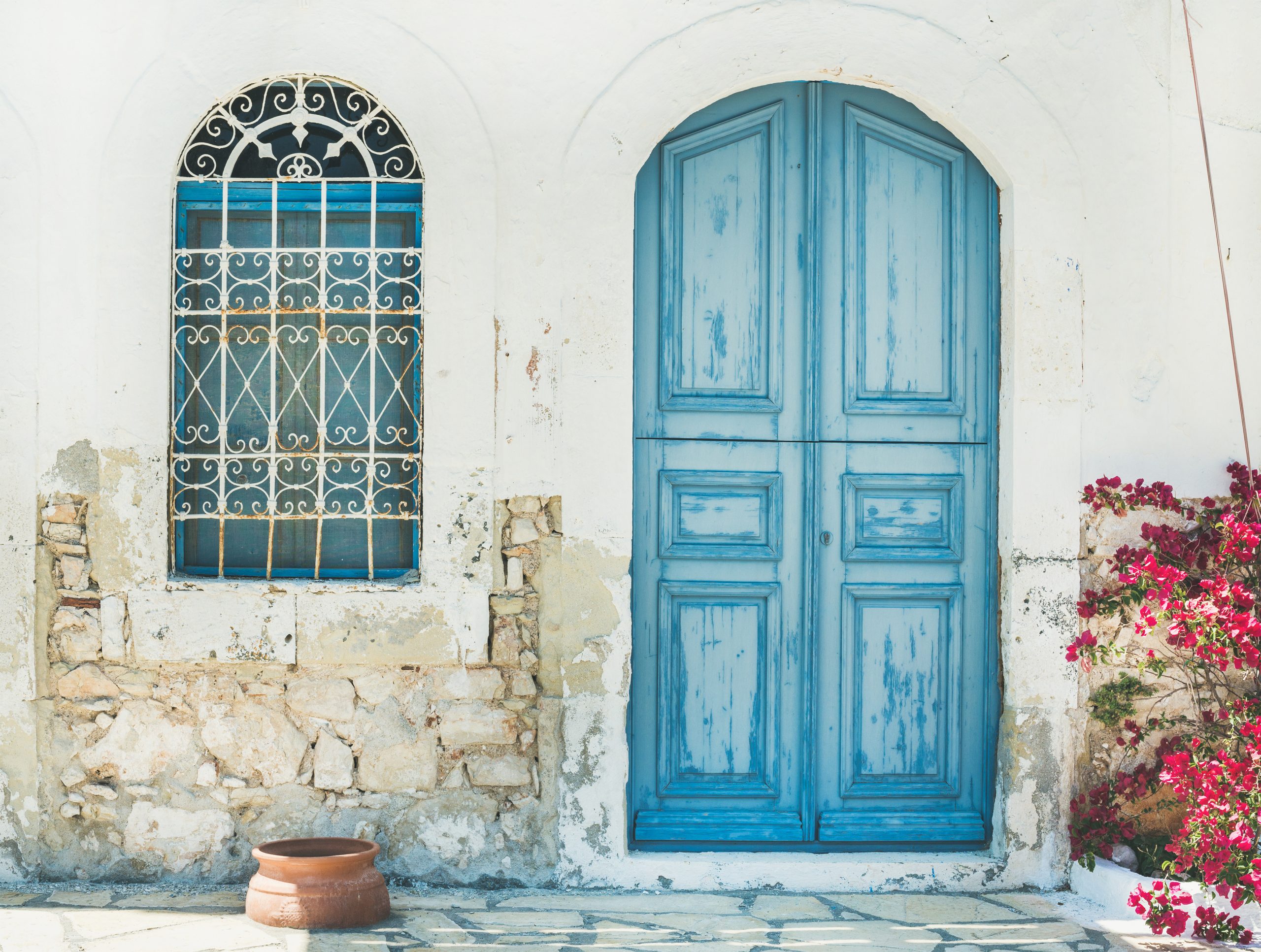 Amorgos (Greek: Αμοργός, pronounced [amorˈɣos]) is the easternmost island of the Cyclades island group and the nearest island to the neighbouring Dodecanese“ island group in Greece. Along with several neighbouring islets, the largest of which is Nikouria Island, it comprises the municipality of Amorgos, which has a land area of 126.346 square kilometres (48.782 square miles) and a population of 1,973 (2011 census).

Due to its position near the ancient Ionian towns, such as Militos, Alikarnassos and Ephesos, Amorgos became one of the first places from which the Ionians passed through to the Cycladic Islands and onto the Greek mainland.

Throughout history, Amorgos was also known as Yperia, Patagy, or Platagy, Pagali, Psichia and Karkisia. Amorgos features a lot of remnants of ancient civilizations. At the time of Archaic Greece, there were three independent city-states there. They are believed to have featured autonomous constitutions but the same currency. Amorgos is distinguished by the size and quality of the walls surrounding the city of Arkesini, by the ancient towers whose remains are scattered all over the island, by the ancient tombs, the stone tools, the inscriptions, the vases and by other antiquities. Due to the name Minoa we suspect that Amorgos had been colonised by the Cretans from ancient times, but there are no archeological remains supporting this view.

Almost a dozen separate inhabited centres are known in this period.
Amorgos is the origin of many famous Cycladic figurines. ‘Dokathismata style’ figurines were originally found here. Cycladic sculptures had been discovered from the cemeteries at Aghia Paraskevi, Aghios Pavlos, Dokathismata, Kapros, Kapsala, Nikouria and Stavros.
‘Kapsala Cycladic figurines’, dating around 2700 B.C., are named after a find place in Amorgos. This is the earliest of the ‘canonical types’ – a reclining female with folded arms. They tend to have slender and elongated proportions. At this time, anatomical features such as arms are modeled three-dimensionally. With the later types, sculptors tended to render this feature with incised lines.
‘Dokathismata Cycladic figurines’ date from a somewhat later period of 2400–2100 BC. Compared to the statuettes of the Spedos type—the most common and renowned type of figurines featuring finely modeled and somewhat rounded shapes—the statuettes of the Dokathismata
type tend to have a more slender and sometimes angular silhouette.

Part of the island is named Aspis, where the ancient temple of the goddess Aphrodite stood.
In approximately 630 BC, the poet Semonides led the foundation of a Samian colony on Amorgos. The Periplus of Pseudo-Scylax mentions it as Tripolis. It was a member of the Delian League. It participated in the Second Athenian League.
In 322 BC, Athens and Macedonia fought the navel Battle of Amorgos.
Heraclides Lembus wrote that the island produced much wine, as well as olive oil and fruits.
With the passing of time, the island’s name changed to Amolgon and Amourgon.

In the 5th century, Bishop Theodore, who attended a synod in Constantinople, signed as Bishop of the Parians, Sifnians, and Amoulgians. It was known as Yamurgi during Ottoman rule between 1566–1829.

On 9 July 1956, a very large earthquake occurred that generated a local tsunami of up to 30 m (98 ft). The shock had a moment magnitude of 7.7 and had a maximum Mercalli intensity of IX (Violent). Fifty-three people were killed and 100 were injured.

The names of the three cities given by Stephanus Byzantinus are Arkesini, Minoa, Aigiali or Melania which, according to inscriptions, are the most correct. The three towns are on the island’s west coast because that is where bays and natural ports that could provide the proper positioning for seaside towns and forts exist.
Aigiali was on the north East Side of the island close to the present day locations of Tholaria and Stroumvos and to this day can still be found there. Minoa is situated at the center of the northern side near the present day village of Katapola and Arkesini close to the present-day lowland location Kastri.
Excavations and findings, especially burial tombs, prove the intense presence of Amorgos during the prehistoric years, particularly during the first period of Cycladic civilisation (3200 to 2000 BC)

The island was featured in Luc Besson’s film The Big Blue (1988), in which Agia Anna and the monastery of Panagia Hozoviotissa can be seen. The island was also featured in Giorgos Kordelas’ film Ariadni (2002).

The municipality of Amorgos is subdivided into the following communities (population at 2011 census and constituent villages within brackets):

The monastery of Panagia Hozoviotissa is situated on the cliff side, northeast of Chora. It was built early in the second millennium in order to protect a religious icon, dating from the year 812, from intruders. The icon is on public display inside the monastery. Opening time for visitors every day from 8:00 a.m. to 1:00 p.m and 5:00 p.m. to 7:00 p.m. Visitors have to be dressed in a specific way in order to enter. Men have to wear long trousers and women a skirt or a wrap around shift down to the knee, not trousers. The shift may however be over trousers. As of July 2012, the monastery is active and houses three practising monks.
Tourism is going up slowly, although the island features prevent mass tourism. The island is accessible only by boat. The 3 main places of tourist accommodations are Katapola, Aegiali and Chora. Hiking ways are relatively well maintained. Other activities are scuba diving, activities relating to wellness, and the beaches (although it is not the main attraction of the island compared to other Greek islands). 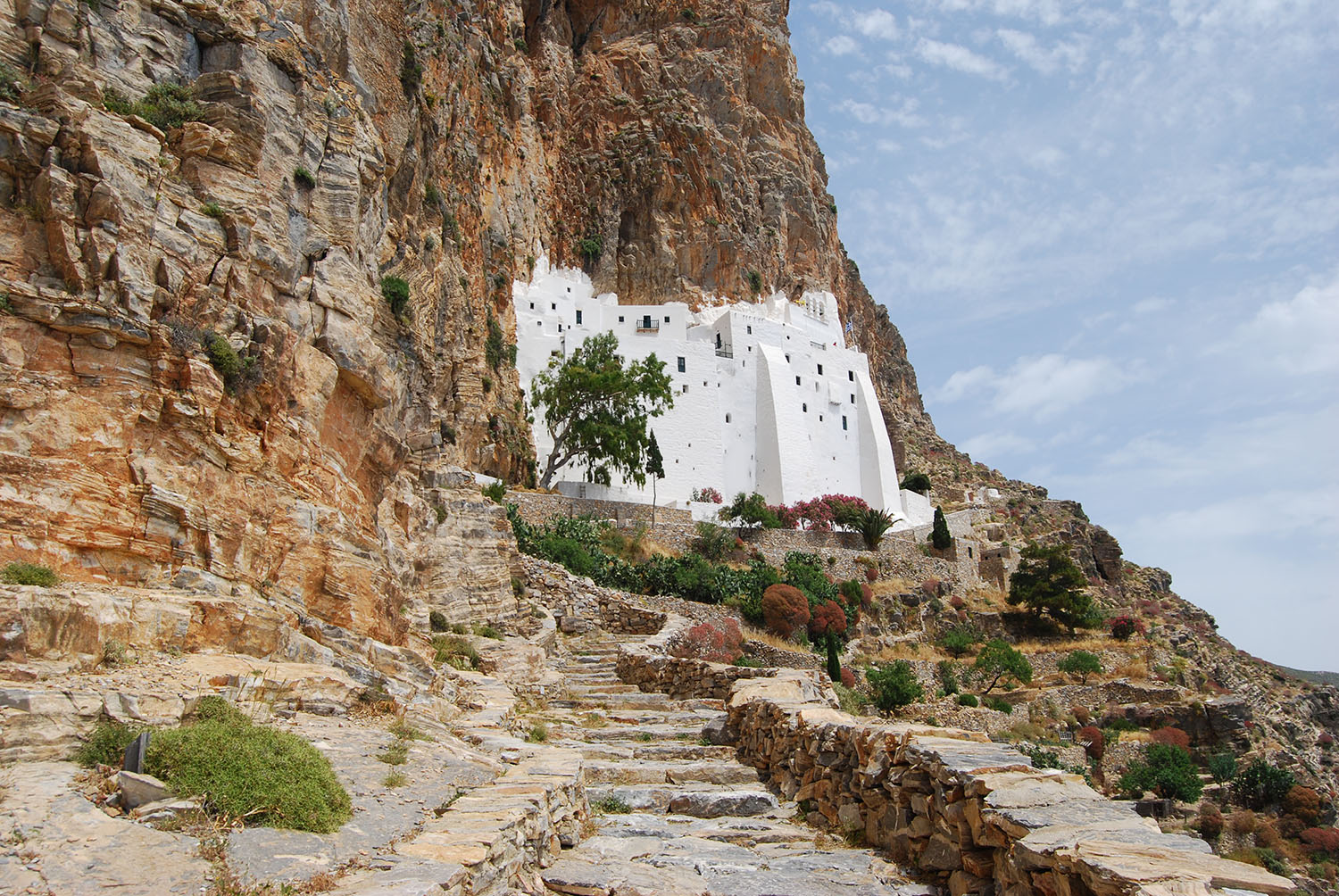