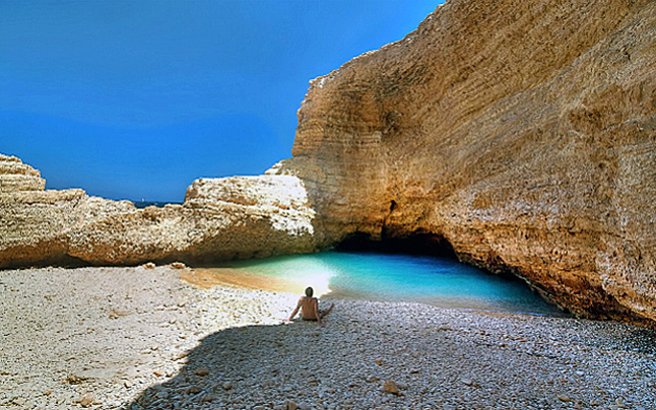 The sandy beaches that rim Ano Koufonissi’s south coast give onto cerulean blue sea of a hue that seems confined to artists’ palettes, seemingly impossible in reality. Hidden away between the larger Cycladic islands of Naxos and Amorgos, Koufonissia (plural) is made up of two tiny islets, Ano Koufonissi (Upper Koufonissi) and Kato Koufonissi (Lower Koufonissi), which are separated by a 200-metre sea channel.

While Kato Koufonissi remains uninhabited, Ano Koufonissi, with its whitewashed Cycladic cottages, has a buzzing little community of 366. Locals live mainly from fishing – it is claimed that there are more boats than residents – there are no real roads and hardly any cars, so everyone either walks or cycles. Before 1980, there was no electricity either, and it is only over the last decade that Koufonissi has become a popular escape with Athenians in search of an unpretentious and inexpensive summer holiday. It’s much loved by yachters too, who moor up their sailing boats along the seafront, to unwind after visiting the noisier and glitzier islands of Santorini and Mykonos.

Where is this beach? Pori beach is on the south coast of Ano Koufonissi with views across the Aegean Sea to the islet of Keros.

Who’s it good for? Its appeal spans three generations

What is there to do? Paddle, wade and submerge yourself in the emerald turquoise water.

What makes it special? This is sand, sea and sun that recalls the long-forgotten Greece of the 1960s.

With its easy-going pace of life, Koufonissi is a perfect place to reset your body clock. Even the larger island can be circled in a day on the flat coastal path, with little for company other than the blissfuly endless sea views, and maybe a few goats.

On the south-west of Ano Koufonissi, directly above the harbour, Chora is the islets’ only settlement. As you disembark from the ferry, you have the 19th-century lighthouse (see Where to Stay) to your left. Chora’s whitewashed cottages are built into a low hillside, where you’ll find a couple of general stores and half dozen seafood tavernas.

East of the harbour, the island’s only road runs about a mile to the beach of Finikas, popular with families due to its proximity to town. The coastal footpath then continues east to the beaches Fanos and Platia Pounta (also known as Italida), as well as “pisina”, a deep natural pool that will entice even the shyest of swimmers. If you are confident in the water and have a good lung capacity, it is possible to swim out through a narrow submerged channel into the open sea

But the best is last: the lovely long beach of Pori, where the sand is satin white and the sea a dazzling turquoise. Facilities come in the form of a beach bar serving cold drinks and snacks – but not much else.

From the south coast beaches, including Pori, you can see the islet of Keros, which is now uninhabited, but was an important centre of Cycladic culture around 3,000-2,000 BC. It seems the Ancients celebrated religious rituals there, and an annual summer archaeological dig, run by Cambridge University and the British School at Athens, has unearthed a hoard of Cycladic marble figurines, most of which are simple geometric female forms, probably used as fertility symbols or burial tokens.

In the Middle Ages, as the Venetians and the Ottoman Turks battled for control over the Aegean, the Cycladic islands were subjected to frequent raids by pirates. On Koufonissi, the locals chose to form an alliance with the pirates, who were from the Mani region on the Peloponnese, and used the sheltered channel between the two islets as a safe haven.

From the harbour in Chora, boats sail across the channel to Kato Koufonissi (journey time 10 minutes). From the landing station, it’s just a 20-minute walk to Laki, a spectacular beach made up of smooth round stones, in a sheltered cove that gives onto translucent turquoise water. Further down the coast, the boat also stops at Nero beach (wind permitting) which is clothing-optional. Popular with free-campers (mainly Athenian “hippies” taking a break from city life, who bring tents and their own cooking utensils), it’s made up of grey sand and pebbles, and backed by low cliffs. Bear in mind that there are no facilities on Kato Koufonissi, other than Venetsanos taverna (00 30 22850 74074) close to Laki, so you should bring a big bottle of water and wear decent walking shoes for trekking across the rocks and low-lying scrub.

Back on Ano Koufonissi, as the sun sets, Chora’s tavernas begin to fill up and serve long leisurely dinners below the stars. Later, you might round off the evening at Scholio, a friendly bar on the hillside above the harbour. It has a cavernous stone interior inside a former school house, which dates from 1852. It serves great cocktails, and stages occasional concerts and photography exhibitions. (00 30 22850-71837; cafescholio.gr; open all year, daily 6pm-3:30am)

Pambelos Lodge £
Lying close to the lovely Pori beach, 3km east of Chora, this purpose-built complex opened in 2013. There are eight units (including doubles, triples, and a family room sleeping six) all with kitchenettes, ceiling fans, and plenty of natural light. The owner will collect you from the port. Doubles from €50 (£40) (003022850 74454; pambeloslodge.gr)

Note that exact restaurant opening times depend on demand and the owners’ discretion. In high season (Jul-Aug) restaurants often stay open from noon to midnight, but in shoulder season, or when there are few customers, they may close to give the staff a rest during the late afternoon. Likewise, when they are exceptionally busy, they may stay open well beyond midnight.

Gastronautis £££
Unlike Koufonissi’s other restaurants, here you can eat contemporary Greek cuisine, prepared with creative flare, and served on slates and big white plates. Opened by a young couple in summer 2013 near the harbour, it has already gained a loyal following. Open daily from May-Oct for dinner only (00 30 22850 71468).

Michailos Taverna ££
Lying 800m east of Chora, this taverna doubles as the island’s only butcher. Needless to say, it’s the best place to eat meat – try the succulent lamb chops, straight off the barbeque.Open daily for lunch and dinner May-October (00 30 22850 71953).

Da Maria £
In a classic Cycladic cottage with whitewashed walls, on the coastal road, this old-fashioned eatery serves authentic Greek home-cooking on a sea-view terrace. The owners speak Greek only, so the easiest way to choose your meal is to pop into the kitchen. Open daily for lunch and dinner May-October (00 30 22850 74128).

Each summer since 2011, Pori beach has hosted the three-day Up Festival (upfestival.gr) of contemporary Greek music, with concerts each night till late.